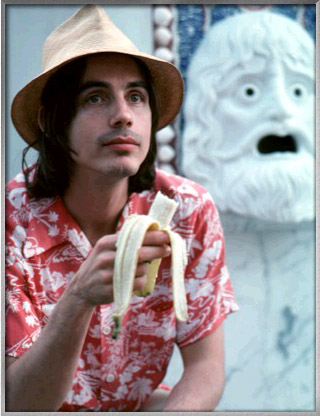 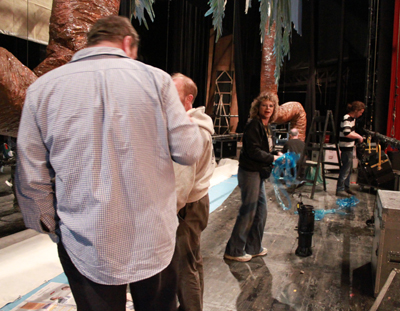 As I’ve mentioned ad nauseam recently, I’ve been performing in a big amateur production of a Broadway musical. We do two shows a week all over the country– which is only as big as New Jersey, but hey, that was a good enough start for The Boss. Still, it’s a shlep, to go to another city twice a week after working Ye Olde Day Job, with 27 tons of equipment, giving a big show, then slinking back home very late at night. There’s a team of dedicated volunteer roadies who go in the morning, unload the truck and set up the stage. But then after the show, after greeting the fans and friends, after removing the makeup, everyone pitches in for The Load-Out. Which apparently in Show Business means what we mortals would call the load-up. 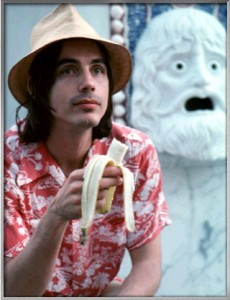 It has its own special feeling, this activity of taking apart the scene of the masque–illusion dissembled, post-applause, the adrenaline shuffling back into its pen for the night. So, of course, there’s this one song about that, and that’s what’s been on my mind and in my ears, and that’s our SoTW.

If a Martian came up to me and asked me to play some California music for him, I’d most certainly pick that most quintessential of The Angels, Jackson Browne (b. 1948).

In the 1970s, Jackson started out with a series of five spectacular singer-songwriter albums, introspective with a beat and a hook, about California-based themes such as love, opthamologists, angst and cocaine. Then he contracted acute Political Awareness, addressing himself passionately to issues such as saving the Brazilian Rain Forest Blue Bat and Integrity and Cocaine. 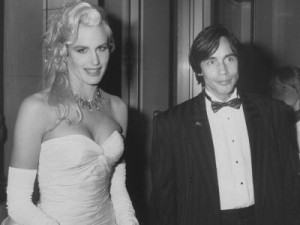 I enjoy a lot of Jackson’s songs, though I think it’s criminal to mention him in the same breath with his contemporaries James Taylor and Joni Mitchell. Perhaps all three were working out of the same 1970s singer-songwriter idiom, but JT and JM are major artists, and JB is a very talented pop musician. I find his best work touching, effective and affective. But even in his pre-politico preaching days, too often he’s mushy, soppy. Even swishy. But heck, he dated Daryl Hannah, so what do I know about the way these things work in LaLa Land? Anyway, we come not to bash Mr Browne, but to praise him.

The last of his personal/poetic albums was “Running on Empty” (1977), a ‘road album’—all the songs were recorded on stage or in the hotel or the bus, and/or dealt with the experience of performing on tour. 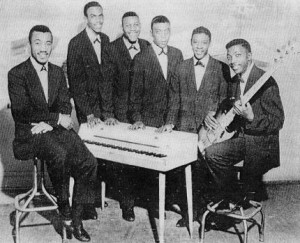 At the tender age of 15, young Maurice Williams of Lancaster, SC was busy writing songs while his friends were out stealing hubcaps (did they have hubcaps in Lancaster, SC in 1953?). At 17, he somehow got himself and his buddies an audition in Nashville, where they recorded Maurice’s ‘Little Darling’ under the name The Gladiolas. It hit #11 on the R&B charts and #41 on the pop charts, but then got covered by a white Canadian group, The Diamonds, and Maurice didn’t need to work again for the rest of his life. But he did, playing fraternity gigs around the South (well, if they had fraternity gigs they must have had hubcaps, no?), and in 1960 Maurice and his current cronies, now known as The Zodiacs, recorded another song he had written back in 1953—to the same girl! ‘Stay’ became as much of a doo-wop icon as its sister piece, and even had the distinction of being the shortest #1 hit ever, clocking in at 1:37. Over the years it was a Top 20 hit for the Four Seasons, Rufus & Chaka Khan, the Hollies, and it’s still sung regularly on Friday nights by many thousands of drunken fraternity boys on both sides of the Mason-Dixon Line.

Jackson Browne circa 1977 would end his show (as he does the album “Running on Empty”) with a long, lovely, rambling tribute to his roadies. It’s done on solo piano, and talks about the post-show weariness, the packing up, and that lingering adrenalin that I’ve been tasting so strongly in recent weeks.  Here his band slowly rejoins him on-stage, and the song mashes into ‘just one more song’–a revisit to Maurice’s big hit, with the object of affection transformed from that unnamed Little Darlin’ to The Audience. Pretty neat, how these Californians write songs.

Here are the album versions of the combo-song. And here’s a video version from 1982 that works pretty much the same way.
, with the divine Rosemary Butler providing one short verse and David Lindley providing the Maurice Williams falsetto.

I’ve got three more shows to do next week. I’m a professional amateur. No cocaine, no groupies, just a bunch of us enthusiastic townies strutting and fretting our three hours on-stage and backstage, putting on a show and packing it up before we go home to the wife and kids.

Now the seats are all empty
Let the roadies take the stage
Pack it up and tear it down.
They’re the first to come and the last to leave,
Working for that minimum wage,
They’ll set it up in another town.
Tonight the people were so fine,
They waited there in line.
When they got up on their feet they made the show.
And that was sweet but I can hear the sound
of slamming doors and folding chairs
And that’s a sound they’ll never know.
Now roll them cases out and lift them amps
Haul them trusses down and get ’em up them ramps.
‘Cause when it comes to moving me
You know you guys are the champs.
But when that last guitar’s been packed away
You know I still want to play,
So just make sure you got it all set to go
Before you come for this piano.

But the band’s on the bus
And they’re waiting to go
We’ve got to drive all night and do a show in Chicago
or Detroit, I don’t know
We do so many shows in a row
And these towns all look the same.
We just pass the time in our hotel rooms
And wander ’round backstage
Till those lights come up and we hear that crowd
And we remember why we came.

Now we got country and western on the bus, R&B
We got disco in eight tracks and cassettes in stereo
And we’ve got rural scenes & magazines
We’ve got truckers on the CB
We’ve got Richard Pryor on the video
And we got time to think of the ones we love
While the miles roll away.
But the only time that seems too short
Is the time that we get to play.
People you’ve got the power over what we do–
You can sit there and wait or you can pull us through.
Come along, sing the song
You know that you can’t go wrong
‘Cause when that morning sun comes beating down
You’re going to wake up in your town
But we’ll be scheduled to appear
A thousand miles away from here.