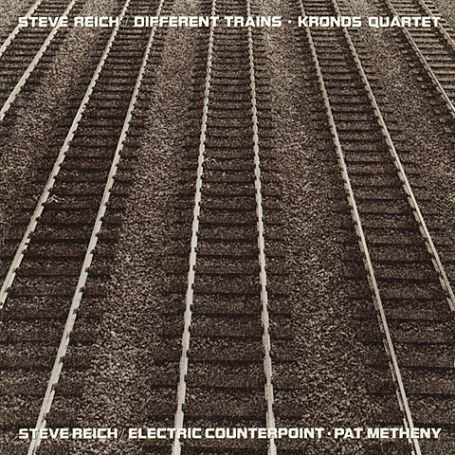 After the War – Movement 3:

Need one apologize for listening tastes? You can listen to Justin Bieber or ‘Lawrence Welk Plays Your Polka Favorites’ all you want, I don’t care. I wish you wouldn’t tell me about it, but I don’t deny your democratic or aesthetic right to do so.

So I’m not going to apologize for the fact that in recent months I’ve become quite engrossed in Minimalist music. I realize this may not do much for my popularity at school or for the ratings of this blog, so maybe next week I’ll write about The Four Tops’ “I Can’t Help Myself”, just to keep the Hit-o-Meter popping. Aware of the dangers, this week I’m going to share with you the unique experience I’ve been having with Minimalist music, specifically that of Steve Reich, specifically his composition “Different Trains”.

I admit that my tastes can run at times to the arcane, the rarified, the–well, let’s call a spade a spade–the weird. I really don’t think that Steve Reich’s “Different Trains” is for everyone, but it has been speaking very loudly, clearly, and affectively to me (and it did win a Grammy), so I want to share it with you. Here come some boring definitions:

‘Minimalism‘ is often applied to designate anything which is spare or stripped to its essentials. Minimalism began as a post-WWII movement in visual arts where the work is stripped down to its most fundamental features; it expanded to encompass a movement in music which features repetition and iteration. The term has been used to describe a trend in design and architecture (Ludwig Mies van der Rohe: “Less is more”) wherein the subject is reduced to its necessary elements, often employing functional elements for aesthetic purposes (Buckminster Fuller). It has also been associated with Japanese traditional design and architecture; with the plays of Samuel Beckett, the films of Robert Bresson, the writing of Ernest Hemingway, James M. Cain, Jim Thompson, and Raymond Carver, with poet William Carlos Williams; and even with the automobile designs of Colin Chapman.

Hey, I know almost all of those! (Well, I picked mostly ones I know, and I’m sure going to check out that Colin Chapman guy.)

‘Minimalist music‘ began in the 1960s as an underground contemporary classical scene in New York and San Francisco, based mostly on “consonant harmony, steady pulse (if not immobile drones), stasis or gradual transformation, and often reiteration of musical phrases or smaller units such as figures, motifs, and cells. It may include features such as additive process and phase shifting.” [We may not know all of those terms, but we get the gist, don’t we?] The composers associated with it are John Cage, Terry Riley, La Monte Young, Steve Reich, and Philip Glass. Strong Minimalist elements can also be found in contemporary classical music employing traditional stylistic elements, such as that of Arvo Pärt (‘Holy Minimalism’) and John Tavener (‘Mystic Minimalism’), and even reaching back to composers such as Eric Satie, Carl Orff and Anton Webern.

New Age and much World music certainly huddle under the Minimalist umbrella. In jazz this aesthetic is rife; there’s even an entire label, EMC, dedicated to minimalist music.

[Here comes the REALLY neat part!] In the 1990s Trance dance music was largely influenced by minimalism, based on repetitive instrumental structures. A favorite of mine, the ultra-bizarre Antony and The Johnsons, exhibit a completely original style of art songs, what I’d call ‘tone poems’.

Meanwhile, back to Steve Reich (b. 1936). He studied at Cornell (thesis on Wittgenstein, whom he of course later set to music) and Julliard. While driving a cab for a living, jazz drumming for fun, and living with Phil Glass for company, he began composing experimental music in a variety of contexts in the 1960s. A lot of it employed sampling (which anticipated the emergence of hip-hop by decades) and ‘phasing’, a process whereby two tape loops lined up in unison gradually move out of phase with each other, ultimately coming back into sync. Here are some of his notable early works:

In later years, Reich began to draw materials from his Jewish background, such as ‘Tehillim’ (Psalms).

And for our Song of The Week, we’re bringing to you ‘Different Trains‘, a three-movement piece for string quartet and tape (1988), which won the Grammy Award in 1990 for Best Contemporary Classical Composition. Snippets of recorded speech are used here as a melodic (rather than rhythmic) theme.

The piece is Reich’s attempt, as an American Jew, to explore the legacy for him of the European Holocaust – a theme that has occupied me greatly throughout my life.

Recorded spoken phrases of his governess, a retired Pullman porter, and various Holocaust survivors are interlaid with the playing of the astounding Kronos Quartet. Reich compares and contrasts (“America-Before the War – Movement 1”) his childhood memories of his train journeys between New York and California in 1939–1941 (he traveled between his parents, who were separated) with the very different trains (“Europe-During the War – Movement 2”) being used to transport contemporaneous European children to their deaths under Nazi rule; and then (“After the War – Movement 3”) with the Holocaust survivors talking about the years immediately following World War II.

A leading professor of musicology, Richard Taruskin, called it “the only adequate musical response—one of the few adequate artistic responses in any medium—to the Holocaust”, and credited the piece with earning Reich a place among the great composers of the 20th century. Reich has been described by The Guardian as one of “a handful of living composers who can legitimately claim to have altered the direction of musical history”, and critic Kyle Gann has said Reich “may be considered, by general acclamation, America’s greatest living composer.”

You can find the definitive version of ‘Different Trains’ by The Kronos Quartet at the top of this page. You might also want to check out this striking rendition of Part 2 by The Smith Quartet from a BBC broadcast, a much more straightforward explication of the Holocaust elements in the piece.

I understand that Steve Reich sells fewer albums than Arrowsmith, and that The Kronos Quartet won’t sell out Madison Square Gardens performing this piece. Nobody’s going to put them on the bill with Justin Bieber, probably not even with Wayne Newton.

But I also understand I’m not alone in finding this work riveting, profound and moving.

SoTW is a non-commercial, non-profit venture, intended solely to promote the appreciation of good music. Readers are strongly encouraged to purchase the music discussed here.