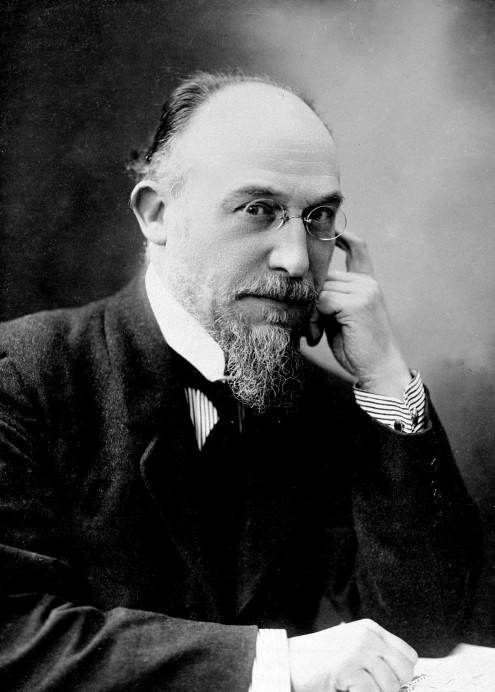 I had a visitor in my brain this week, Erik Satie. He drops in every few years, usually during October, though I haven’t kept any statistics. He always brings with him this one particular vignette of sound that reminds us why we’re so glad he’s appeared again at our door—a unique piece of music so emotionally precise, so descriptive of a certain autumnal ennui, a state of mind and being, a very particular and fraught set of internal meteorological conditions, wholly irreplaceable, wholly unmistakable. 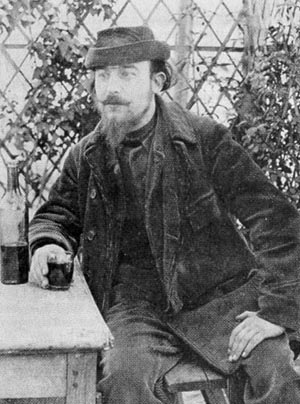 first post-Kooper LP. It was as shallow and derivative as it was commercially successful (veryveryvery). The first and last cuts on the album were a piano piece by an obscure French composer arranged for guitar, two flutes and bells by BS&T trombonist Dick Halligan.

It took me several years, but as is my wont, I eventually got around to the original by Erik Satie (1866-1925), a French cabaret pianist and avant-garde composer.

Satie was also a creator of hoaxes (an announcement of the premiere of his new anti-Wagnerian opera, which he never wrote), his own compositional system, his own one-man religion (the Metropolitan Church of Art of the Leading Christ, for which he wrote a Grand Mass). He maintained a secret hobby–on small cards he would draw pictures of imaginary buildings made of various metals, and publish ads in local papers offering them for sale. For a number of years he dressed like a priest. 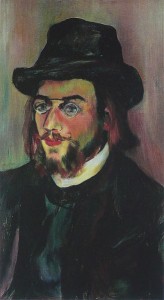 He had one intense love affair in 1893 with model, painter and trapeze artiste Suzanne Valadon. He reputedly never touched a woman (or man) after that.

He was associated with Rosicrucianism, radical Socialism, Cubism, Expressionism, and Dada. At various points in his life he hung out with composers Debussy, Ravel, Poulenc, Milhaud, and Stravinsky, as well as artists Cocteau, Duchamp, Picasso, Braque, Man Ray, Breton, dancer Diaghilev and film director Rene Clair. But none of these lasted very long, neither the ideas nor the movements nor the relationships.

He seems to have annoyed most of them; no one entered his apartment for the last 27 years of his life. After his death, 84 identical handkerchiefs were found in his wardrobe.

A joiner and a loner. 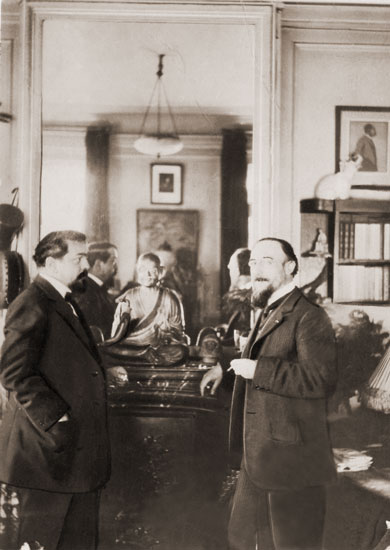 He wrote spoofs, ‘melodramas’, humorous miniatures for piano, and a sort of ‘liner notes’ for his compositions. They became better known than the music, and he eventually was forced to demand that they not be read aloud while the music was being performed.

Ironically, Satie’s reputation has done very well in the last half-century. He experimented with what he called furniture music, meant to be in the background rather than listened to.  Here’s a very fine example, the unspeakably beautiful Gnossienne No.1 (Rogé).

Satie’s music is considered a forerunner to minimalism, which became a dominant approach to classical music throughout the 20th century, and as such has achieved no small degree of repute (from proponents such as John Cage) and popularity (thanks to the jump-start of good old Blood, Sweat & Tears.) Cage performed Satie’s composition ‘Vexations’ (performed here by Aldo Ciccolini).

The manuscript bears the inscription: “Pour se jouer 840 fois de suite ce motif, il sera bon de se préparer au préalable, et dans le plus grand silence, par des immobilités sérieuses” (“In order to play the theme 840 times in succession, it would be advisable to prepare oneself beforehand, and in the deepest silence, by serious immobilities.”) Cage interpreted as an instruction that the piece should be played 840 times straight. Who knows what Satie really meant? In 1963, it was premiered by a team of pianists in New York. The audience paid $5 to hear some part of the 18-hour marathon. Only one person stayed the route.

Be that as it may, Satie’s greatest hit is without a doubt the ‘Gymnopédies’, a series of three short compositions published around 1888. These are three variations on the same theme with barely perceptible differences. The effect is somewhat like walking around a sculpture, viewing it from several angles. The first of them is the one we’re offering up as our Song of The Week. It’s performed here by Pascal Rogé (after carefully considering a number of performers–there are few classical works in which I’m so picky about my preferred version). If you really need to, you can read about the various hypotheses regarding the meaning of the name of the piece, but they’re not conclusive, and I sure didn’t feel any better after reading them.

I do, however, feel a whole lot better after listening to the Gymnopédies, a massage for an aching soul. 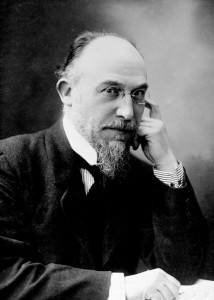 On the one hand, it’s a landmark piece for proponents of Ambient music such as Cage, Brian Eno, Phillip Glass and Stephen Reich. Ambient music is a genre that stretches from early 20th century minimalism right up to the New Age pap of today. It “focuses largely on the timbral characteristics of sounds, often organized or performed to evoke an atmospheric, visual” or “unobtrusive” quality–what Satie called furniture music, what is today sometimes called airport music. (“Ambient Music must be able to accommodate many levels of listening attention without enforcing one in particular; it must be as ignorable as it is interesting.”—Brian Eno.)

But ‘Gymnopédies’ is not the bland background music it may sound like from that description. Less is more, and this particular ‘less’ is a whole lot. It touches me very deeply, in a very tender place in my being. It’s evocative, hypnotic, haunting, and if you listen to it not 840 times, but just a few, don’t be surprised if it becomes part of your musical landscape, and comes back to pay a very welcome visit when your soul needs some breathing space.