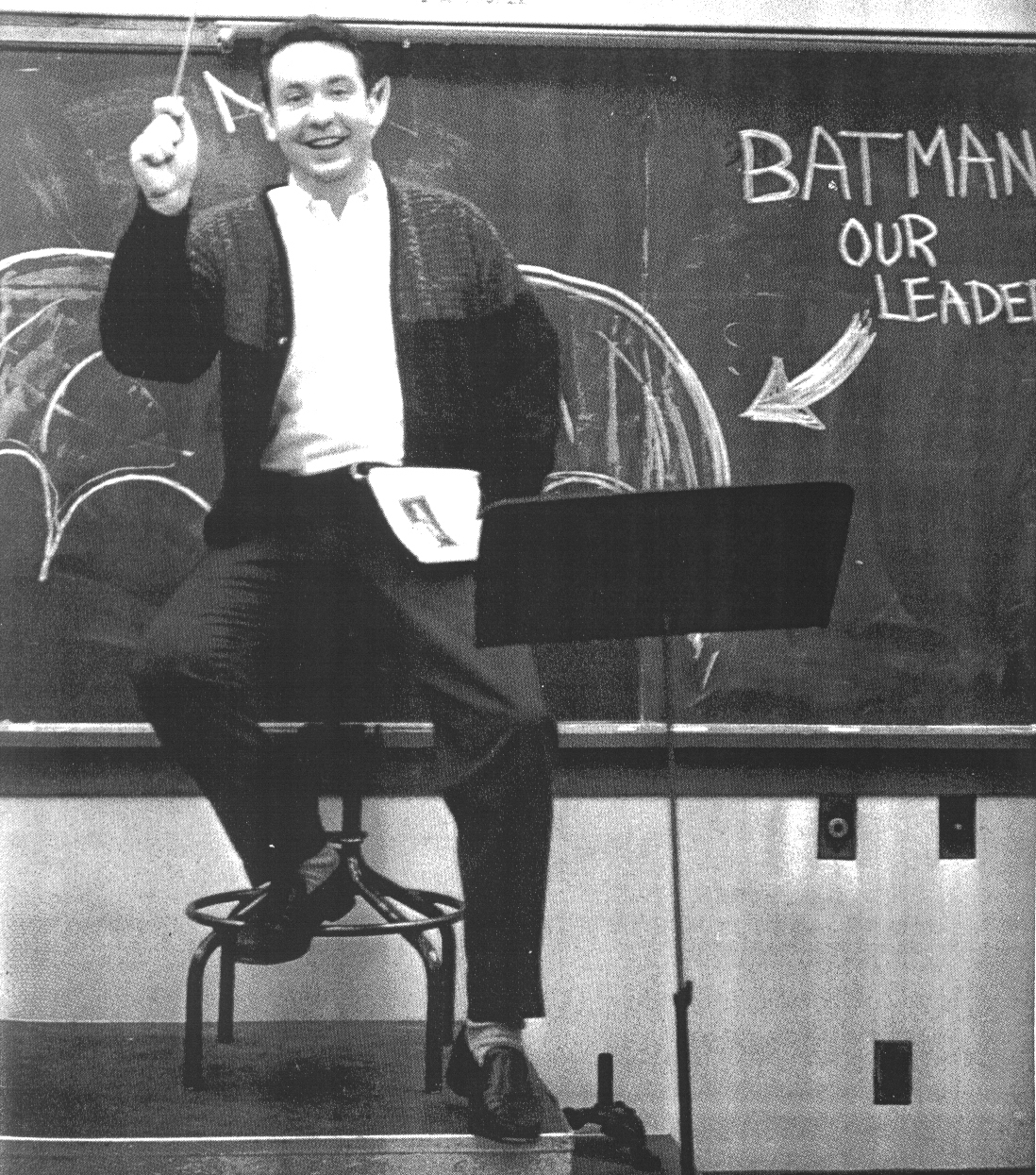 This week’s Song of The Week is about beatniks, high school nostalgia, and the convoluted paths we take to visit our past. Oh, yeah, and about a terrific if somewhat obscure jazz standard. If that sounds oxymoronic, it’s because the unique charm of jazz lies in the fact that a song can be both obscure and yet a standard. But we’ll get to that.

Ella Fitzgerald, ‘Spring Can Really Hang You Up the Most’

The best part of my youth was spending junior and senior years in Ensemble, a select 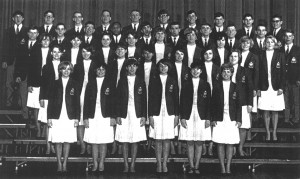 36-voice group, top of the heap of the half-dozen choirs at Woodward HS in Grover’s Corner, Midwest. I’ve been singing ever since, and still attribute my basic good habits to the training from those years, third period, right before lunch, five days a week, not counting summer rehearsals. Heaven only knows how the level of the group was so high at a regular public high school. I remember distinctly being no higher than the middle of the pecking order of the eight basses in terms of vocal abilities (range, quality, reading, memory). Don Howells was the best. He sang ‘You’ve Lost That Loving Feeling’ with more resonance, depth, and soul than Bill Medley. Don was a pretty nice guy, even if he wasn’t stellar academically, and I hope his significant vocal abilities stood him in good stead wherever he wound up. My guess would be either pumping gas or in a correctional institution. But, my, that boy could sing. 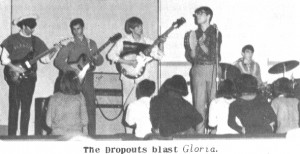 I’m talking about Ensemble because I think it was really fine musically. If this were nothing but a self-indulgent nostalgia trip, I’d be talking about that legendary garage band The Dropouts, and their groundbreaking performance of Van Morrison’s ‘Gloria’, which introduced electric music to my high school’s halls.

Anyway, in my memory, Ensemble was the finest amateur group I’ve ever sung in, and there have been many. But one wonders about the veracity of one’s memories, especially concerning the romantic days of one’s youth, right? So thanks to the wonders of modern technology and the luxury time on the hands of lots of bored baby-boomers, I was able to listen to Ensemble singing the standard ‘The Second Time Around’.

I’ll be the first to admit, it sounds pretty unspecial. It sounds VERY unspecial. Is my memory that askew? Well, it just so happens that in recent years I’ve had some degree of contact with four members of the group– Marc, Mark, Aaron, and Kathie. And it turns out that four of the five of us have been seriously involved with singing over the course of our lives, three professionally. They all corroborate my memory. It was an excellent, stringent training ground for precise, high-level choral singing.

Our director was named Frank Lang. He was a bachelor, a mamma’s boy according to rumor. Probably in his mid-30s when he taught us. He was petulant but professional. A good-humored guy, but he worked intensively with us for so long that there were plenty of conflicts along the way. I’m not idealizing that. We didn’t idolize Mr L 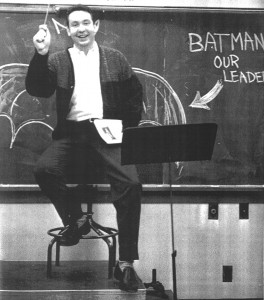 ang. My memory tells me that even then, as obnoxious high-schoolers, we respected his professional talents. I was a particularly obnoxious teenager, universally disliked by my teachers. A pain in the neck, a wiseass with a big mouth, a chronic disrupter of classroom decorum. Except for Ensemble. At the bell, I’d be sitting in my chair. Actually, at the edge of my chair. That’s what Drill Sergeant Lang forced into our hormone-choked brains. When you sing, your back is straight, your butt is at the edge of your chair, and your body is fully engaged to support your voice production. Even today, no matter how tired, no matter how bored, that’s how I sit in rehearsal.

All five of us remember a lot of the repertoire. We could sing a lot of the songs today. We all would be happy to have the opportunity, which of course we won’t. But there’s one particular arrangement that Mr Lang brought us that I’ve had a dynamic relationship with for these 44 years since I last saw him. I remember the score, written in his hand. It was his arrangement of a difficult, beautiful, challenging jazz song, ‘Spring Can Really Hang You Up the Most’. 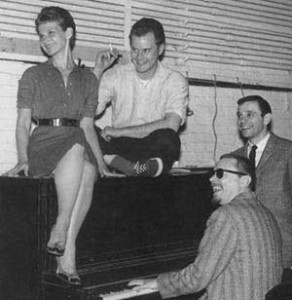 The lyrics of the song were written by Fran Landesman in 1952, who with her husband Jay and pianist buddy Tommy Wolf, wrote a beatnik musical (sic), “The Nervous Set”, poster by Jules Feiffer, which actually made it to Broadway. Here’s a fascinating clip describing Fran as an impresario and hostess of no small renown, a central figure in the bohemian scene of the late 50s/early 60s in St Louis (where she was central in promoting the nascent careers of Woody Allen and Barbra Streisand, among many others), later in London. According to friends, Fran was inspired to write ‘Spring Can Really Hang You Up the Most’ by TS Eliot’s poem, ‘The Wasteland’. (I wrote my master’s thesis on TS Eliot. In retrospect, I wish I’d written it on Fran Landesman.)

April is the cruelest month, breeding 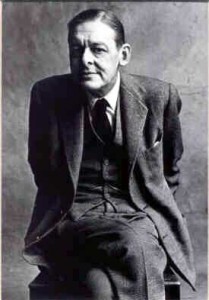 Lilacs out of the dead land, mixing
Memory and desire, stirring
Dull roots with spring rain.

I sure wish I could talk a bit about the beatnik scene of the 1950s, but another time. Perhaps I’ll take that opportunity when I talk about the companion piece from the same musical, another obscure standard, ‘Ballad of the Sad Young Men’, a very, very beautiful song itself.

Ms Landesman wrote more versions of lyrics for this song than Dylan did for his masterpieces of the mid-1970s. At the end of the post you can see the version I know best, the lyrics Mr Lang incorporated into his choral arrangement for Ensemble.

I don’t know what version of the song inspired Mr Lang. All the 1950s cool chick singers recorded it – June Christy, Chris Conner, Blossom Dearie, Julie London, Helen Merrill, Irene Kral – as well as many non-cool ones (Carmen McRae, Betty Carter, Ella Fitzgerald, Sarah Vaughan). Although the song has never really penetrated the wider audience’s consciousness, in recent years both diva vamps (Jane Monheit, Holly Cole, and a personal favorite, Kat Edmonson) and rock/pop singers (Rickie Lee Jones, Bette Midler) have had their go at it, a credit to the song’s staying power (as one critic said, the song “grows every year”). Barbra Streisand sang it live at the very beginning of her career (1962) and again towards the end (2009).  One of my very favorites versions is that by Norwegian Radka Toneff (who is always wonderful, with her glacial purity), to whom I paid tribute at some length in SoTW 033. The song has also been given innumerable instrumental treatments over the years.

As I’ve mentioned, ‘SCRHYUTM’ (sounds suspiciously like…) is an inordinately challenging song technically. Despite the catchy hook of the title (with the roller-coaster stomach-in-your-throat plunge on ‘hang you up’, the melody is slithery, slippery, abstract, bordering on unsingable. From experience, let me tell you that this isn’t one that you want to try to perform unaccompanied. I’ve been listening to the many attempts, and have heard some very fine singers struggle with the song. So why do so many keep trying their hand at it? Because it’s so enticing and elusive and seductive, because it’s so precise and affective in its evocation of the spring blues. April can indeed be the cruelest month.

Interestingly, very few men have sung the song, although there’s nothing gender-specific about it.

So which version are we going to go for with our Song of The Week? I wish it could have been Ensemble’s but that one’s gone. It could easily have been Radke’s, or either of Barbra’s. But we’ll go with the best-known version of a too-little-known song, that of Ella Fitzgerald’s from the album “Clap Hands, Here Comes Charlie!” (1961). We’ve been carrying on far to long to give fair space to the impeccable, inimitable Ms Fitzgerald. Let’s just say that she more than anyone has the technical skill to deliver the song effortlessly, focusing purely and sweetly-sadly on the oh-so-melancholy music itself.

I don’t know what musical path led Mr Lang to ‘Spring Can Really Hang You Up the Most’. I don’t know what his tastes were. But my guess is that this is what he really loved, and that we performed ‘The Second Time Around’ and ‘Jingle Bells’ a lot more for obvious reasons. I remember his arrangement of ‘SCRHYUTM’, albeit sketchily, because it was (and still is) a very difficult song. I would give an awful lot to hear his version today. 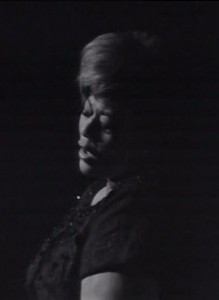 Choral jazz is a sub-sub-sub-genre I worked in passionately for years, , especially as it’s being taken to new levels in Scandinavia todayinspired by Mr Lang, a very short midget on the shoulders of a giant. I sure wish I could show him the work I was fortunate enough to do in the field. And I believe very firmly that Mr Lang’s arrangement was half a century ahead of its time. Probably more, because the field still hasn’t gotten there. I thought it was intriguing when I encountered it at 17. Today, in retro-retrospect, it looks all that much more brilliant.

And I sure wish I could tell him how much it’s been a part of my musical soul after all these years. I’m guessing it would give him some satisfaction, to know that he planted some musical seeds inside those pimpled skulls, seeds that actually took root. I was 20 years younger than the Frank Lang in the picture, and I’m a whole lot older than that man now. A few years ago one of my old high-school friends sent me Mr Lang’s obituary from the Grover’s Corner News. I’m not going to have the chance to thank him face-to-face. So I’ll do it here, second best but still somewhat gratifying. Thanks, Mr Lang.

SoTW 033: Radke Toneff, ‘The Moon is a Harsh Mistress’

February 3, 2022 by jeff Jazz Personal Song Of the week Vocalists 9