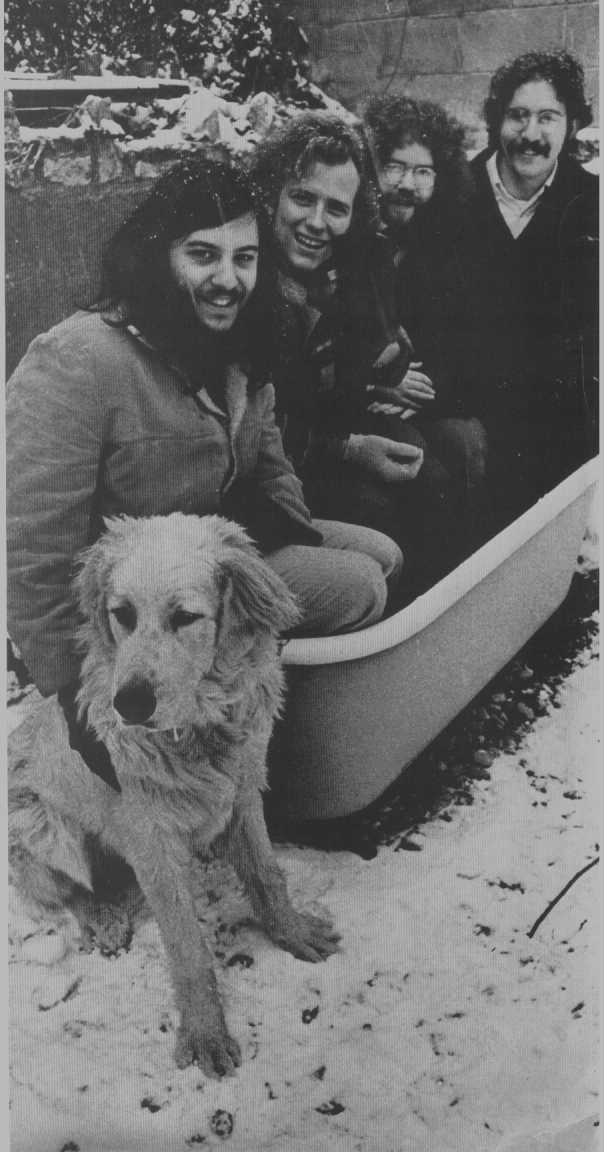 This is one of those cases where I didn’t find the song of the week – it found me.

By a certain confluence of happenstances, the four living subjects in the picture here have been in contact with each other this week, some of us for the first time in 40 years. Sweet Mitty, the Great Pyrenees (in the foreground), lives on in our hearts and in that Great Kennel in the Sky.

The photo was taken in the winter of 1969-70. Those weren’t ordinary times, by any criterion. Just after Woodstock and Mai Lai, just before the breakup of the Beatles and Kent State. Those glorious, heady days of the Woodstock Generation just before the floor fell out.

Four college buddies, waxing nostalgic, practicing ‘collective memory’— not in the Halbwachian sense of that which is “shared, passed on, and constructed by the group or modern society,” but in the sense of the four of us trying to piece together our fragmented recollection of the seminal events of our lives. “Hey, do you remember when Sandy took us to that hotel gig as pranksters, you rented an Indian chief’s costume…”; “Ah, it was Sandy who got us the gig? I always wondered how that happened, but it was you who was the Indian chief, I was an Indian with a dot. But do you remember what happened with you and the model who was getting her body painted?” “Oh, jeeeez…”

Some of us hadn’t spoken for 40 years, so there is some serious and uncomfortable catching up to do. How do you start talking to someone with whom you once shared so much, and now today–perhaps–so little? Or perhaps we’re still the same people we were back then, just playing out our lives along our disparate paths. One leads a celebrity-laden self-help foundation; one writes adventure novels; one took an expatriate refuge in religion; one is looking for a job. Roots and routes.

Those got-the-world-by-the-balls smiles not withstanding, not too long after that picture was taken, each of the four of us touched a very low place. To tell the truth, all five. I just learned that Mitty was traumatized by an intruding thief. Most of us reassembled the pieces, or reconstructed ourselves by inventing for ourselves replacement parts.

Which brings me to James Taylor and our Song of The Week. James is half a year older than me, and at the time our bathtub picture was taken, James was in rehab for drug abuse and paralyzing angst. He recorded his first album for Apple, which brilliantly and harrowingly documented the deepest and darkest corners of his soul. And mine. But for our SoTW we’re going to skip forward to 1988, 20 years on, for his look back at those days and his own bathtub friends. The song is Never Die Young’ from the 1988 album of the same name, but I find the arrangement there too glitzy and glib. Here it is in the 2007 ‘One Man Band’ version. And here’s my favorite, just James and his guitar.

We were indeed ring-around-the-rosy as children, and circles around the sun in the summer of Woodstock. Have we given up? Have we slowed down? Well, I’m sure there’s a substantively different answer for each of the four of us.

There’s a statement by Hank Thoreau (if my memory serves me well–a tenuous postulate at best–the redhead with the beard in the black and white photo read him religiously), part of which is famous: “Most men lead lives of quiet desperation and go to the grave with the song still in them.”

Well, James and Hank, all four of us inside the tub are still kicking. “With the song still in us”? Well that’s ambiguous. Three of us have written books, so I guess you can’t say we haven’t achieved self-expression on some level. I won’t speak for the others, but I like to think of my life as one of ‘quiet inspiration’. For me, very much informed by the music from The Day. It’s hard to explain to someone who wasn’t from that generation just how integral a role the music played in our lives. How each Dylan and Beatles album charted new courses for our minds and spirits. ‘The song’, in that sense, remains in me, and I assume in my four rub-a-dub hoodlum friends.

“Never Die Young”, for me, is the multifocal prism through which I squint at that past. In this live version, James himself says he has no idea what the song means exactly. I think I do. It contains all the love and pain and hopes and disappointments and optimism and disillusionment that our lives have traversed. In that, I suppose, we’re all golden boys grown old. But we were fortunate enough to be children of a very special time. As always, James puts it best:

But our golden ones sail on, sail on
To another land beneath another sky

We were ring-around-the-rosy children
They were circles around the sun
Never give up, never slow down
Never grow old, never ever die young

We couldn’t touch them with a ten-foot pole
No, it didn’t seem to rattle at all
They were glued together body and soul
That much more with their backs up against the wall

I guess it had to happen someday soon
Wasn’t nothing to hold them down
They would rise from among us like a big baloon
Take the sky, forsake the ground

Oh, yes, other hearts were broken
Yeah, other dreams ran dry
But our golden ones sail on, sail on
To another land beneath another sky