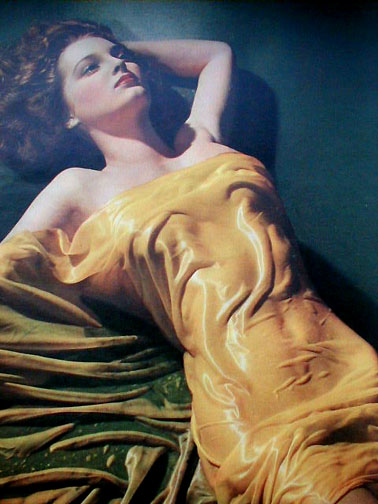 For a goodly number of years now, I’ve been singing modern a cappella, a young genre of mostly young music for mostly young singers and listeners. I sing mostly the contrabass part—you know, the real low dum-dum-dum underneath everyone else that you can’t really hear but it looks funny and fun and is kind of endearing and cute, even if not many Carusos begin their careers there. And I’d like to share with you this week how I decided to become a bass.

The ones who get the spotlight are those prima divas, the sopranos. They sing the melody, draw everyone’s attention, they a priori get first crack at all the solos. And, singing the melody, they don’t need to be too smart. So I tried that; and, cute as they were, I got tired of the inner blonde vapidness of singing melodies. 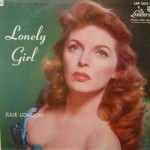 So I tried the altos. Challenging? Always. They get the trickiest parts to sing. They’re outside the spotlight, but they’re really the crucial element in the harmonic brew. I would have loved to be an alto, but to my great chagrin they didn’t want me. They said I’m no fun in rehearsals, all I do is sing. 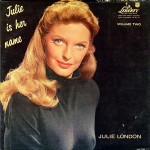 So I tried the tenors. Well, no one would accuse them of being the sharpest pencils in the box, but not all of them are prissy, and they get to sing pretty neat parts sometimes. But then I found that every time we did a song they sang something different, which was a bit frustrating for me. And besides, I couldn’t keep up with their drinking.

So I slipped down to the basses. Good guys, never met a bass I didn’t like. But how long can you sing the tonic of the chord without going brain dead? And by the time the other voices learned their parts, I was ready to pack it in and go home. 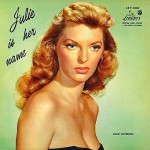 Then I saw this clip. And I knew I wanted to be a real bass, a dum-dum-dum contrabass. So I did. It’s been fine, but reality is never quite the same as the dream, is it? 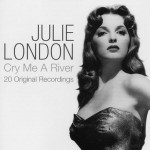 Julie wasn’t a great singer, but she was certainly a competent one, reserved and controlled, a member in good standing of the bevy of excellent cool white chick jazz singers in the 1950s, including Anita O’Day, Blossom Dearie (that’s her real name), Chris Connor, June Christy, Peggy Lee, Rosemary Clooney (George’s aunt), Sheila Jordan, and Helen Merrill. Julie’s niche was the slow, sensual and sultry. The word ‘smoky’ seems to have been created especially for her. Here’s a ton of clips of her singing. And here’s a ton of pictures of her.

She was good enough for Billboard to name her the most popular female vocalist for 1955, 1956, and 1957. The covers certainly didn’t hurt the album sales, but her reputation as a vocalist has remained quite respectable. 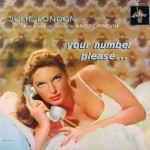 She seems to have had an ambivalent attitude towards her ultra-sexy image: on the one hand, if you look at the clip and the album covers, she’s clearly very comfortable (and successful) in the role of sexpot. On the other, she seems to have been a shy person, whose film career was limited by her refusal to do nude scenes.

But she did make lots of movies and TV shows, and a whole pile of pretty respectable LPs. Still, I like to remember her for a few less-known nuggets:

Her first husband was Jack Webb. Yup, Sgt Joe Friday himself. They were married from 1947–1954. They were both ardent jazz fans. And they met when Julie was 15!!

Julie was apparently quite a looker at a young age. In 1943, GIs were pinning up on the walls of their barracks and tents all over the world the rather amazing picture above of 17-year old Julie from Esquire magazine. 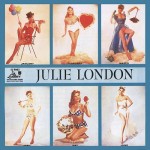 After she divorced Sgt Friday (“Just the facts, ma’am”), she married Bobby Troup, composer of the jazz and pop classic ‘Route 66’. They stayed married for 40 years. In Hollywood.

But mostly what I remember Julie for is this rendition of ‘Bye Bye, Blackbird’, a staple of the Great American Songbook, written in 1926 by Ray Henderson (music) and Mort Dixon (lyrics). I was quite surprised to read that the song has often been understood to describe a prostitute’s resolve to leave the business (thus a mirror-image song of ‘The House of the Rising Sun’). 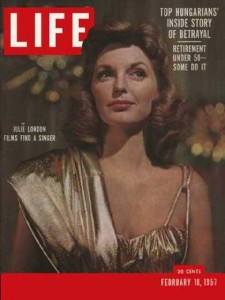 No one here can love and understand me
Oh, what hard luck stories they all hand me
Make my bed and light the light
I’ll arrive late tonight
Blackbird, bye bye.

While there may be more revelatory versions of the song (Miles Davis’s is probably my favorite), and more famous ones (Keith Jarrett, among a myriad of others), it’s Julie London that’s engraved into my very male brain. It’s so elemental, torch singer and bass, female and male, yang and yin, one on top one underneath.

I’m sorry I haven’t been able to discover who the bassist is in the clip. One reader said it’s Don Bagley. But it doesn’t really matter. In my imagination, it’s me.