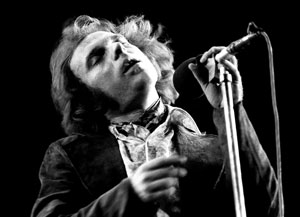 This week we’re back to the legendary summer of 1968, treating ourselves to one of the finest albums we’ve had the great honor and pleasure to embrace – Van Morrison’s “Astral Weeks”. 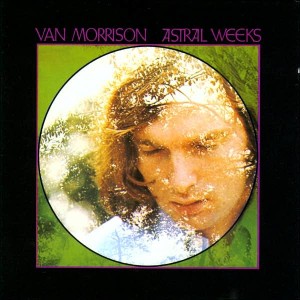 I’ve written about Laura Nyro’s “Eli & the 13th Confession” as a desert island album of mine. I understand that that’s a personal choice, and a rather quirky one, even though “Eli” commands immense respect in certain circles (after I wrote about it I saw Elton John on Elvis Costello’s “Spectacle”, where they were singing the praises of “Eli” like they were Laura’s mothers, in almost embarrassing hyperbole). “Astral Weeks”, on the other hand, is universally recognized as a masterpiece. You can find the record on every single serious desert island (quite an image—an archipelago of babyboomer Bali Highs) and on every list of the peaks of popular music in the last half century. Whoops, threescore years (how time flies).

In my mind, “Astral Weeks” was always “Eli”‘s soul-brother–not the ‘blue-eyed soul’ of The Righteous Brothers and Mitch Ryder, but of serious white artists plumbing the blues roots of rock and roll, melding it with the Tin Pan Alley tradition, and forging a young, vibrant, breathtakingly transcendent idiom.

I shared an apartment with these two albums when they saw the light of day (hell, when they shed the light of day) in the heady days of 1968. Both albums clock in at an unusually long 46+ minutes, so they were back-to-back on a well-worn 100 minute cassette of mine in the 1970s and 1980s. And in the last 20 years, I have continued to revisit them frequently, perhaps more than any other aural scene from those years. I know them like I know the inside of my soul.

Remarkably, neither has changed much. Both are spiritual fountains of youthful vitality, their waters magically smoothing out the wrinkles. The record companies’ attempts to feed the market demand for new nostalgia has had little impact. They added a few solo demo tracks for “Eli”, which really were a bonus if you don’t confuse them with the real thing. And no bonus tracks for “Astral Weeks”. It was born perfect and complete, and the ravages of the decades haven’t diminished it a bit.

The only sacrilege performed on “Astral Weeks” was by the creator himself. Van Morrison decided, 40 years after the fact, to revisit the album–two performances at the Hollywood Bowl, the original guitarist, yadda yadda, the whole “The Unique Event, Part II” syndrome. I haven’t listened to it. I heard 10 seconds of it on the radio before I could tear my ears away from it, much like the morbid fascination with roadkill. “Astral Weeks: Live at the Hollywood Bowl” 2009 can only demean and diminish the original, and I’m not going to willingly sully my ears. Van himself said that he entered the project only because he never had a chance to perform the “Astral Weeks” song cycle. Well, that’s what he says, but he also said that “Madame George” isn’t about a transvestite (and that the British government are “fascist bullies disturbing our peace” in protest against safety measures taken to prevent the spread of Covid-19), so you want to be a little careful about his comments after the fact.

As opposed to what he sings, which should be embraced unguarded.

Van Morrison was born (1945) and raised in Belfast, Ireland, the scene of most of the songs on “Astral Weeks”. He grew up listening to American jazz and blues, his idol being the Louisianan bluesman Leadbelly (Huddie Ledbetter, d. 1949), convicted murderer, cohort of Woody Guthrie and Pete Seeger, and lecturer/performer at Harvard and Yale in the 1930s. Here’s Van’s favorite Leadbelly cut, ‘Easy Rider‘.

In 1964, Van wrote and sang with the band Them the iconic garage band classic ‘Gloria‘ (replete with non-Ed Sullivan lyrics). Moving to New York, he was washed and tamed, and wrote the incomparably joyous ‘Brown-Eyed Girl‘, released on a lackluster album, “Blowin’ Your Mind”. 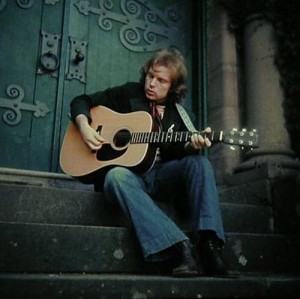 Then, in 1968, out of nowhere, “Astral Weeks”. It sold poorly, like “Pet Sounds” half a year earlier—a masterpiece but the poorest selling album of a major artist, too refined for the AM Top 40 market of the late 1960s. Then came the ebullient song and the LP “Moondance” (1970), perhaps his most popular album. It was the first of a wondrous series of albums including “His Band and the Street Choir” (1970), including ‘Domino’; “Tupelo Honey” (1971), including the magical title track (SoTW 116); “Saint Dominic’s Preview” (1972), including ‘Jackie Wilson Said’; “It’s Too Late to Stop Now” (1974), a respected double live album I’m less fond of;  and “Veedon Fleece” (1974), a gem I just really got to know very recently and am totally enthralled with. Van’s still going strong today— new contexts, new styles, very much the same irrepressible Irish folk/soul poet. But that 1968-1974 run was his Golden Age.

What is unique about “Astral Weeks” is how unique it is. It’s one of those masterpieces that seems to come from no tradition and left no legacy. Stylistically, it stands absolutely alone. Spiritual blue-eyed Celtic soul acid acoustic jazz-rock. It’s gorgeous and sumptuous and moving and transcendent. No one else even tried to go there. It is literally inimitable.

Probably the closest album to it in its musical frame of reference is The Pentangle, their first, an album I quite admire. Listen to this, and you’ll hear how many light years beyond its contemporary surroundings “Astral Weeks” was. Its impact, if not its influence, has been indelible. Those of you who like homework assignments can check out the long Wikipedia entry.

“Astral Weeks” consists of 8 songs. They contain lots of autobiographical details blown up to mythic proportions as only the Irish can get away with. Each one is an odyssey and an oracle unto itself. The plaintive narratives of days past: ‘Beside You’, ‘Cyprus Avenue’, ‘Madame George’. The jazz-informed, upbeat title song, ‘Young Lovers Do’ (maybe my favorite–try counting the beat from within in the chaos), ‘Sweet Thing’. The love song ‘Ballerina’ (conjuring for me W.B. Yeats’ dancer). The ghostly ‘Slim Slow Slider’. They’re very simple musically—just a few basic chords, mostly in 6/8, evocative but amorphous lyrics, very little song structure to hold him back. It’s folk/rock jazz.

“Astral Weeks” is an acoustic album—Van on a very forward, present, insistent rhythm guitar providing the heartbeat of the cuts; a tasteful flute, vibraphone, an amazingly dynamic small string section (tacked on after the original recording, which I refuse to accept–it’s just too organic). And then there’s Jay Berliner (nylon-stringed guitar), a studio musician who has played with everyone from the Metropolitan Opera house orchestra to Debbie Boone, including along the way Charlie Mingus on “The Black Saint and the Sinner Lady”; and Connie Kay, the ultra-refined drummer of the Modern Jazz Quartet (not playing the shakers on our SoTW). And the other star of the album, the one who drives the magic carpet, Richard Davis, for my money one of the two finest acoustic bassists in jazz (alongside Ron Carter). Oh, yes, and the singer. Van Morrison.

We’re going to focus on the title track here. To tell you the truth, I looked at the lyrics for the first time just now. There were a number of phrases I’ve been transported by for 53 years without ever understanding–”immobile steel rims”, “talkin’ to Huddie Ledbetter”, “puttin’ on his little red shoes”. Those go alongside the images I did hear correctly: “If I ventured in the slipstream between the viaducts of your dream”, “standin’ with the look of avarice”. I don’t mind that I never caught some of the lyrics. They’re less important than “she come up to my room” in ‘Gloria’, believe me. They’re the paints that Van the Man uses to create this masterpiece. They’re just colors.

The song ‘Astral Weeks’ is over 7″ long, but has only 3 short verses (they start “If I ventured”; at 0:55 “From the far side”; and at 3:35 the first verse repeats.) Most of the song is embellishments on this structure following the second and third verses. Van’s rhythm guitar plays two chords over and over, I and IV. Richard Davis’s bass propels it all forward. And Van’s singing. I’m not even going to try to describe it. It’s a miracle. Just take a listen.