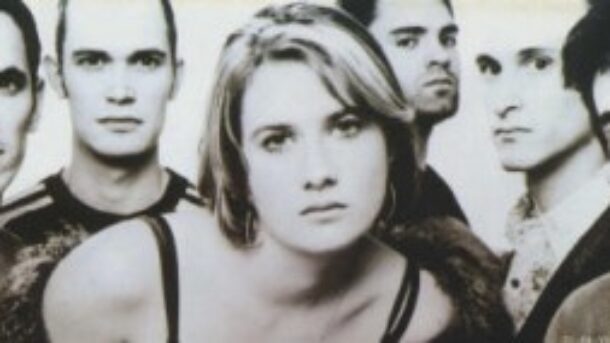 Wait!!! The fact is that I have indeed foisted them on innumerable friends, the great majority of whom actually appreciated the gesture. So before you Delete me and them, give a listen to their song ‘Refugee’ from their first CD, “Laughter Through Tears” (2003).

The make-up of the group seems rather amorphous, more a scene than a band. The extravagant violin and all the charisma seem to have been supplied by Sophie Solomon, and the talent by Lemez Lovas, both of whom subsequently left the bash, after which the party crashed musically.

The term world music used to make me extremely uncomfortable. I always figured that anything that big can’t mean anything other than ‘part-of-the-universe’ pablum. But then I saw somewhere a definition that gave me great comfort – it’s music you can dance to, with some Balkan and Afro-Cuban ingredients and maybe a shot of Arabic. That’s comforting because it excludes a whole lot more than it includes. No Japanese Gagaku. No Mongolian Khöömii. No Andean Sikú. Okay, now I have some idea of what I’m getting. I can do Balkan.

So how does Sophie Solomon, a young half-Jewish British violinist become a klezmerite? >From a BBC interview with her:

[In the 1950’s] my uncle Harold was very into Yiddish song and trying to revive it. He cut a 78rpm recording of himself singing Yiddish and Hebrew songs. He was a really bright guy who went up to Oxford to read philosophy at 16 and was really good friends with Bertrand Russell. He immersed himself in Yiddish culture and wrote a contemporary “Third Seder “(Passover supper) piece with Yiddish music. But his father told him that if he continued his relationship with his non-Jewish girlfriend, he would say Kaddish (the mourner’s prayer) for him. So in 1954, instead of coming home for the Passover supper, he turned on the gas in his Oxford flat and that was that. He left behind the old 78 of him singing the songs. 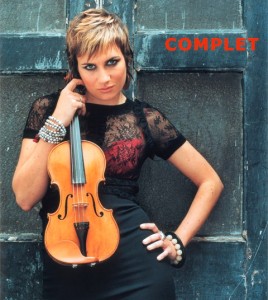 Of course he died 24 years before I was born in 1978 and I didn’t know much about him until I got into klezmer. Then my dad told me more about him and found his old record. It was an amazing discovery for me and I got more and more intrigued. And recently I was commissioned by the Jewish Institute, funded by the National Lottery’s Milennium Award scheme, to write a piece based round my Uncle Harold’s story for string trio, accordion, clarinet and the samples of my uncle’s vocals. I called it Feter Chaim Moyshe (feter = uncle), his Hebrew name. Its first performance was at Trinity College in London in March 2003

What can I tell you? It’s not life-changing music. Well, I guess for Sophie it was. But everyone who hears it says, ‘Hey!’, and dances a little Balkan jig.