I’ve always had a thing for female singers, ever since the good old days (Laura Nyro, Joni Mitchell, Linda Ronstadt, Rickie Lee Jones, Tracy Nelson, Emmylou Harris. I’m intentionally excluding Janis Joplin and Carole King for reasons I won’t go into, even though I admire both of them as artists and as women.) 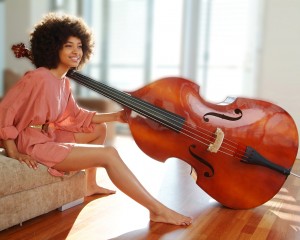 But then all these years listening to jazz. The female vocalists are a great genre unto themselves (over recent years I’ve had my flings with Anita O’Day – my favorite of them, Ella, Lady Day, Blossom Dearie, June Christy, Rosemary Clooney, Holly Cole, Patti of Tuck&Patti, Julie London, Sarah Vaughan, Helen Merrill, Ahinoam Nini, Dinah Washington, Nancy Wilson, Peggy Lee). But they’re all performers, interpreters. None of them are really artists in the sense of creating a uniquely personal body of work. They may have a personal style, but in the end they’re interpretive artists, dependent on the songs of others. (It’s interesting that among those coming from the rock context, Joni Mitchell, Laura Nyro and Rickie Lee Jones are all creative artists in the fullest sense.)

But with all due respect to all these talented jazz performers, they’re all what I would call ‘singers’.

Female artists in jazz? Have you ever seen a picture of Carla Bley? Here’s a whole blog posting on her. And recently, Norah Jones and Diana Krall, although both of whom have a lot of, um, appeal (if that’s a politically acceptable term), neither of them are really artists. 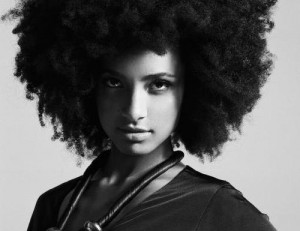 Let me try to define a few terms here (my personal quirky definitions):

Singer: one who sings songs, where the song itself takes center stage, and the performer doesn’t stray from it significantly; Frank Sinatra

Jazz singer: like the above, but taking material primarily from The Great American Songbook and/or improvising on the basic format; Sarah Vaughan, Ella Fitzgerald

Vocalist: using the above elements, but with a degree of mastery and control of the material that he/she transcends it to make a personal artistic statement; early Barbra Streisand (see SoTW 009), Billie Holiday.

Vocal artist: an artist who uses his/her voice as an instrument, free of the fetters of ‘songs’ or genre, or clearly using them as vehicles for a personal statement. Kurt Elling. Bobby McFerrin. 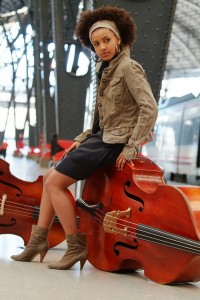 Jazz vocalist: one who works in a jazz context, often outside the framework of songs, relying heavily on improvisation in open, challenging structures beyond the standard 32-bar format; I can’t think of a single such artist from the 20th century, but it does include the three young ladies I want to say a few words about this week, Esperanza Spalding, Luciana Souza, and Claudia Acuna

In recent months, I’ve been inundated with these incredibly talented, very feminine female artists. A couple of them aren’t ‘vocal artists’—Eliane Elias a successful classical pianist from Brazil, turned jazz pianist in New York, turned pianist/singer of Brazilian material. Critics like her jazz piano, her Brazilian singing less. I quite like the former, and I’m a sucker for a beautiful woman singing bossa nova. Not to mention the fact that she had liaisons with two (!!!!!) of Bill Evans’ bassists, Eddie Gomez and Marc Johnson (currently married to the latter, after divorcing Randy Brecker—now there’s a lady who’s committed to jazz!). And then there’s my most recent infatuation, Maria Schneider, a composer and bandleader from the border of jazz and contemporary classical music, who is so wonderful that I’m not going to let myself start talking about her now. Here’s my SoTW about her.

Likewise Luciana Souza, who released a new CD this week. She’s Brazilian (NY>LA), daughter of bossa nova bluebloods, and a really stunning artist in a whole range of styles. She also deserves a SoTW to herself.

And Claudia Acuna, a Chilean (>NY) vocalist I was just introduced to a few days ago, and am quite busy immersing myself in. More to come on her. 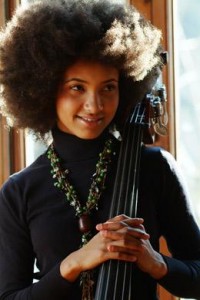 Well, after all that exuding and rambling, let’s try to focus on one of these ladies—if not the least of the talents, I guess she’s the smallest of them, a slip of a girl, 5’1″, not counting her hair. She’s 25, from Portland, Oregon, raised alone by her musical Welsh/Hispanic/Native American mother in a black ghetto (without her black father), spoke Spanish with her nanny, but somehow osmosed an Afro-Cuban and especially a Brazilian sensibility. Her mother home-schooled her. She discovered the double bass at 15, dropped out of high school at 16, tried music at college but dropped out, financially scraped through the Berklee College of Music and graduated in 3 years, when she was hired as one of the youngest professors in the institution’s history. Today she sings, plays jazz bass, sings, leads her own trio, and has released two fine CDs, “Junjo” and “Esperanza” of mostly original material, from which our SoTW ‘I Know You Know’, is taken. She’s considered one of the most talented young jazz artists around today, recently gave a command performance at the Obama White House.

She protests that she wants to be judged for her musicianship rather than her sex appeal, maintaining that ‘female musicians must take responsibility to avoid over-sexualizing themselves’. But if you take a look at her, you’ll see there’s no small dose of disingenuousness in that statement. She’s been featured in Websites such as (I’m serious here) More than Hair, Naturally Curly, Hot Mama Daily and Make Black Hair Happy. As well as not a few serious jazz sites. 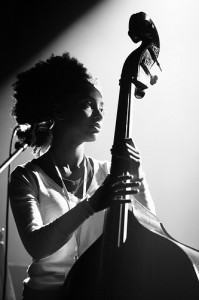 She certainly does play up her femininity. Very successfully, in fact. What do you want? She’s 25, young, sexy, and on top of the world musically. And she exudes all of those. Thank goodness. Because that’s her, that’s her world, and she makes some very fine, exuberant music expressing it.

Does sexuality demean a female artist? What a stupid question. Of course, it’s not a necessity. Both of my favorite female artists from the rock context, Joni Mitchell and Laura Nyro, deal with their sexuality at length in their music. And neither one is, in my eyes, very attractive. But sex is a central concern for them, and they each deal with it in a serious way, and for both it’s a central theme. (I’ve often said that I learned most of what I understand about what it is to be a woman from Joni Mitchell. But maybe that says more about me than it does about her.)  Sexiness is no substitute for talent. But I suppose I spend more time watching Diana Krall and Norah Jones than I would if they looked other than they do. 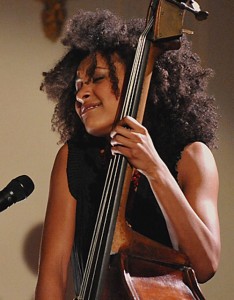 But young Ms Esperanza seems to have the world by the proverbial horns. Here she is accompanied by a pretty darn good non-jazz pianist, Stevie Wonder, who perhaps can’t appreciate her appreciable externality, but certainly gets the sex appeal of her music. And here’s another version of the same song, in a TV studio, with her playing an amplified acoustic bass guitar. And here’s another clip of another original song of hers, with a short interview, where you can see that she’s not exactly walking around in a burka.

I don’t know what’s happening in the world, all these sexy, incredibly talented, Brazilian-infused jazz chanteuses appearing all of a sudden. But I do know that Esperanza and Luciana Souza, are a major-league creative artist each. And I certainly am appreciative, and wish them both a long career making fine music, even after they grow gray and wrinkled.

SoTW is a non-commercial, non-profit venture, intended solely to promote the appreciation of good music. Readers are strongly encouraged to purchase the music discussed here at sites such as iTunes or Amazon